On a computer, seized by investigators, of a writer, 25 years of age, was recovered a
hard drive, to which many videos and images were found within.. In the foreground, a guy,
with a white t-shirt wrapped around his head, crouched in the dark below the end of
the platform, while the subway train is approaching. The train stops, and the emergency
brake is pulled, while 9 hooded vandals run onto the platform, pulling many emergency
handles and closing the doors by hand, as others pull cans from their backpack.

The passengers are locked within the metro, Frightened and confused faces stare out of
the windows which are quickly covered in spray paint. There are women, and also
children on board. The attack is recorded in detail because one of the writers carries a
Go Pro camera strapped to his head. After less than a minute the driver appears, yelling,
one guy hits him, while another sprays a stream of paint toward his eyes.

The local police of Milan has a team that specializes in investigating graffiti attacks
(The Urban Decor Protection Unit). Led by investigators and experts, including
Cmdr Tullio Mastrangelo, ten years experienced. Those viewing stand in silence,
and had seen no such action before. The date of the attack, April 20 2013, late in the
evening at Metro Station Villa Fiorita, on the line 2 of the Metro Milano.

These images, showing an 'Emergency Brake' or 'Palanca' show an extreme form of
graffiti vandalism, many can enter a deserted hanger at night, and attack an unattended
train, but this form of assault is more dangerous, and more of an adrenaline rush for
those involved, and as a consequence, considerably more of a serious offence -
Conspiracy to damage, domestic violence, resisting a public officer, interruption of a
public service. So far, 17 searches between Milan, Turin, Genoa, Monza, Rome, Lecce,
and abroad, have yielded Italian, and foreign members of the crew OTV, but the number
of suspects is in the 40's.

Graffiti is forming into more and more organised squads, Councillor for Security Marco
Granelli says, 'Who decorates Milan should be encouraged, but who defiles, and with
violence should be punished, and the distinction should be very clear' 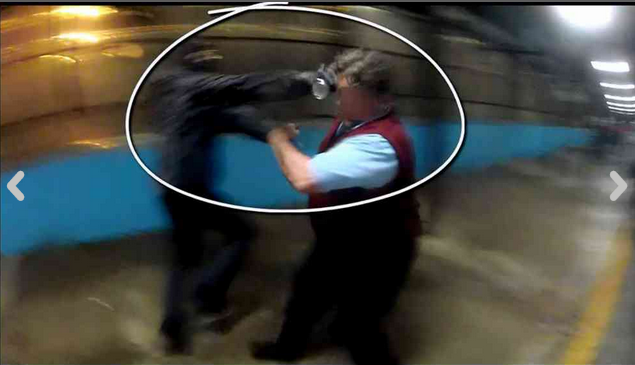