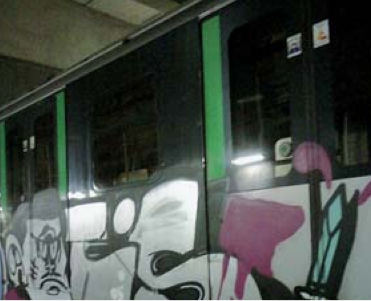 An English vacation that ended in jail. Three young writers from Manchester, England, including a
minor boy were detained by police in the maze of Abbiategrasso station on subway line 2.

They were spotted cutting a fence, and had smeared a new Metro train with graffiti when chased by ATM security.

It happened at 2am Saturday night, the guards noticed the young graffiti 'artists' who had penetrated a
fire escape grill at the perimiter of the station, cutting a fence setting off the alarm system. The security
blocked the fire escape with a car, the boys had a scuffle to escape the guards, but in the end the three
fugitives (2 brothers of 21 and 19, and a minor of 17, all residents of Oldham) were stopped by ATM
officers, and delivered to police and arrested for criminal damage and resisting a public officer.

The writers have spent the weekend in jail and today will be processed for summary: "The hard work
of the company against the vandals is finally getting results" said an ATM spokesman.
by . at Monday, March 11, 2013